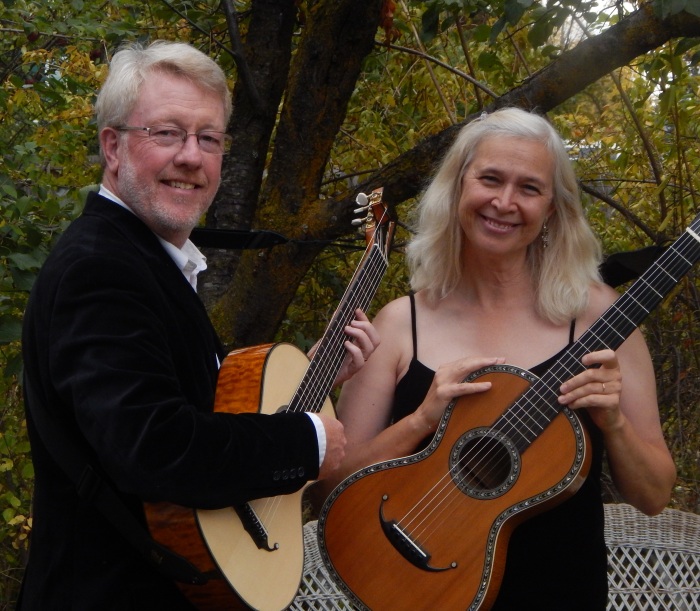 Sunday, March 22nd, 2020, 2:00 pm, Gallery One – Eveleth Green Gallery (third floor), Ellensburg, WA (by donation). Neil and Tamara will perform as part of the “Guitar In The Gallery” Series.  The duo returns with music they found in the British Library in London last spring. Music by composers who deserve to be better known! They will be playing a set of early nineteenth-century guitar duets on historic instruments.  The concert will also feature the premiere of music recently written for the duo – stay tuned!

Saturday, March 21st, 2020, 7:00 pm, Fire on Main, Soap Lake, Washington. Join Neil and Tamara for a concert in the lively ‘burg of Soap Lake for a magical evening of music and community. Socializing starts at 6:00 with light hors d’oeuvres and continues in an intimate studio/gallery setting at 410 East Main. For details and to reserve a place, contact curator@fireonmain.com. This is also part of the “Guitar In The Gallery” Series.

Friday, April 6th, 2018, at 12:30, Gonzaga University, Spokane, WA. Neil and Tamara presented a lecture recital extolling the virtues of improvisation in the performance of early nineteenth-century guitar music. Preludes and cadenzas were mandatory for performers during this period. Neil and Tamara explained where these should be played and where to go for information on how to include this performance practice in one’s own playing.

Sunday, March 4th, 2018, at 2:00 pm, Gallery One Eveleth Green Gallery (third floor), Ellensburg, WA (by donation) Neil and Tamara will perform as part of the Guitar In The Gallery Series.  It will be an afternoon of early nineteenth-century guitar duets on historic instruments.  The recital will be all French music and will feature works by Henry, Lhoyer, and Varlet.  Much of what Neil and Tamara will be playing is music they found in the French National Archives in Paris.

Saurday, December 3rd,2016, at 7:00 pm Seattle Classic Guitar Society Annual Holiday Fund-Raising Concert! The concert will take place at the Seattle Mennonite Church – 3120 NE 125th Street, a block east of Lake City Way. Parking is behind the church. The Caulkins Duo be playing one piece – The Grand March by the French composer Benigne Henry (fl. 1818). This concert is a fund-raiser for the non-profit Seattle Classic Guitar Society. The suggested donation for admission is $10, or $8 with the donation of a non-perishable food item for North Helpline.