We were saddened to hear of the passing of the wonderful maestro of the guitar who taught us so much about musical nuance, guitar technique, and the understated critique. 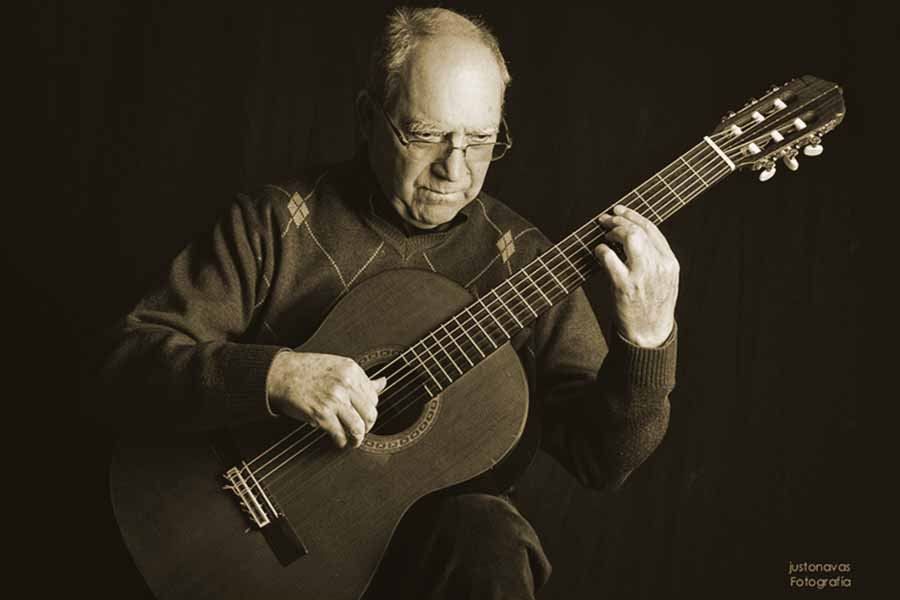 José Luis Rodrigo Bravo (1942-2020). Born in Madrid, Spain, Jose Luis Rodrigo studied at the Royal Conservatory of Music of Madrid with Jose Maria Lopez and Regino Sainz de le Maza.  He also studied with Daniel Fortea and Andres Segovia.  As a student he received the Extraordinary Award de Carrera (1961), First Prize in Harmony (1962), and First Prize in Counterpoint and Fugue (1966).  He had been professor of the guitar at the Royal Conservatory of Music of Madrid since 1970 and held the Andres Segovia Chair of the International University Course of Spanish Music “Musica en Compostela” since 1981. He received awards in international competitions, concertized throughout Europe, America, and Asia, and collaborated with prestigious orchestras.  He was considered one of the world’s foremost experts on the interpretation of Spanish music.

Jose Luis demonstrated a profound musical knowledge coupled with virtuosity and a sense of elegance. He wonderfully communicated that to his students.  He was a charming and endearing person.  All of us who had the good fortune to study with him have fond memories of Friday afternoon classes adjourning to the “Savol” bar across the street where Jose Luis would chat with us, buy the first round, then catch his cab home.  We all owe a tremendous debt to Maestro Rodrigo.  He will be greatly missed.

We will be premiering “Prelude Music” in three movements (Prelude, Fugue, and Passcaglia) written for us by organist/composer Michael Young as well as playing two pieces by Peruvian/Berlin composer Virginia Yep. We’ll also play new repertoire from the archives: more duets by the French early 19th century composer Benigne Henri, and from the British Library, a Duo in four movements – Allegretto Sustenuto, Adagio, Scherzo, and Polonais – by W. W. Würfel, a composer whose name is as fun to say as his music is to play!

Neil and Tamara Caulkins recorded a critically acclaimed CD and have pursued a rigorous concert schedule, including performances in New York, Calgary, Hong Kong, and throughout the Southeast and Pacific Northwest. The duo’s playing has been described as “altogether exciting!” (by Fanfare, New Jersey), “a striking debut album” (by Guitar Review, New York), and as “A well-matched team” (by Guitar International, Wiltshire, England). Their scholarly publications have been published in the US, the United Kingdom, Japan, and Germany. They studied at the Royal Conservatory of Music in Madrid, Spain and hold Master of Music degrees from the University of North Carolina at Greensboro.

Thank you to everyone to turned out for this winter’s Musica Antiqua recital! We enjoyed a lovely an evening of early 19th-century chamber music.  Neil and Tamara were joined by Hal Ott (flute), Kara Hunnicutt (cello), Jeff Snedeker (horn), and Michelle Rahn (viola) to perform Gottlieb Streitwolf’s (1779-1837) Trio for flute, guitar, and cello, the Sonata for Horn and cello by Jan Vaclav Stich (1746-1803), and the Serenade for flute, viola, and guitar by Gaspard Kummer (1795-1870).  A recording of the concert will be available shortly in the music library on the fourth floor of Brooks Library on the Central Washington University campus in Ellensburg, WA.

Here is a live recording of the early nineteenth-century duet entitled Polaca by Benigne Henry (fl. 1818).  Tamara is playing an 1830 French instrument and Neil is playing an 1850 German one.

Please join us in Olympia next Saturday, Sept. 14th at 7:00pm at the Gloria Dei Lutheran Church (1515 Harrison Ave NW, Olympia WA). This is a benefit for the Gaza Palestinian Cultural Palace. All are welcome!

Neil’s lecture/demonstration at the conference explored the practice of improvisation and guitar music in the early 19th century. He brought our nifty packable Terz guitar to play examples of improvised preludes. An excellent overview of all of the IGRC papers and performances can be found here.

In this post, I would like to turn my historian-of-science eye towards the IGRC proceedings and apply insights of the French philosopher Bruno Latour to the practice of music. In his book, Science in Action, Latour refers to the accumulation of scientific data and the dominant explanatory theories as “immutable mobiles.”  The process of writing down and circulating scientific discoveries results in scientific knowledge that travels without being changed by local observations (i.e. that is mobile and immutable). Universal scientific findings are findings that are true everywhere. According to Latour, the repeated iterations of information layered multiple times results in scientific knowledge that has gained legitimacy and authority. In the same way, I suggest, a musical score, composed and set down on paper, widely circulated and played over and over by many different musicians, starts to become an authoritative “classic.”

The period we refer to as “Classical” in Western music is generally thought to be the period from about 1780 to 1850. Much of the music composed was published to be purchased by a broader public of expert amateur musicians. These were often highly accomplished players, however, they were not necessarily trained in music theory or the intricacies of improvising from a bass line, as were professionals, especially during earlier periods. The composers who wrote for these musicians, such as Leopold Mozart, specified the exact notes these musicians should play and did not expect them to add to what was written on the page. By the time Beethoven was publishing his music, all musicians were expected to stay true to the score.

Nevertheless, the practice of improvising continued to be a vital part of music-making. Virtuosi famously invented cadenzas to impress their audiences. Amateurs also played improvised preludes and passages, especially in the early 19th century. This was true for guitarists as well as for pianists and other instrumentalists and for singers. This tradition was largely lost by the mid-to-late 19th century in classical music but continued to be a key element of new musical forms such as jazz and eventually rock & roll.

Therefore, when we play musical scores from the early 19th century, we can think of them as mutable mobiles. These scores were published and meant to travel – one could hear the same duet variations of Fernando Sor’s Souvenir de Russie, Op. 63, or Mauro Giuliani’s Rossiniani, in Paris, as well as in Vienna or St. Petersburg. The evidence, nevertheless, suggests that these standards of the guitar repertoire were also meant to be interpreted somewhat freely, perhaps with an improvised prelude, a flashy cadenza, or even some flexibility in the interpretation of an arpeggio.

Like a scientist – a term invented during this period – the early 19th century musical artist created musical performances working from both a written score and from his or her own observations and experiments. In the early 19th century, science too was often performed for a public audience. Sir Humphry Davy, for example, exhibited his own improvisatory flair while demonstrating the properties of gases. Such improvisations were expected. Improvisation was part and parcel of early 19th century culture, both in art and science.

See below for Artist photos: 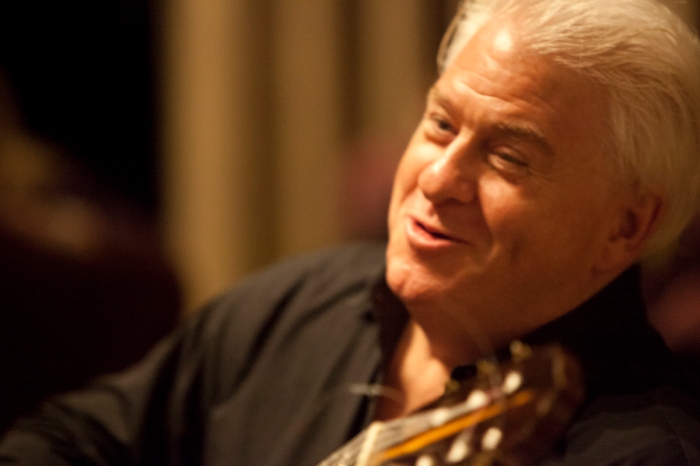 What You See, And What You Don’t; Improvised Preludes From Early 19th Century Guitar Methods

Neil Caulkins will be presenting a lecture/recital on the early 19th-century performance practice of improvised preludes.  It will be on July 17th at 9:45 a.m. in the International Guitar Research Centre’s conference as part of the Altamira Hong Kong International Guitar Symposium in Hong Kong, China.

Overview: We see descriptions of composers and performers from the 19th Century being tremendous improvisers.  We also see reference to improvisation in method books from that time.  What we do not see is improvisation on the modern classical music stage.  There were more methods for the guitar written in the early 19th century than for any other instrument. Because the guitar was not yet taught in the conservatories, these methods had to offer detailed instruction about every aspect of music. This makes them a treasure trove of information from which all musicians can benefit.  This lecture/recital focuses upon the early 19th century performance practice of the improvised prelude. A detailed examination of existing written examples of these improvisatory preludes will be beneficial to all musicians who perform music from this period.  Then we will explore how to construct/compose our own “improvisatory” preludes using historic cadence examples as the basis for historically informed introductions.

Sources: Current scholarship, such as by Kenneth Hamilton, has focused upon the piano literature such as by Cherny. This lecture draws upon guitar methods and music from the early 19th century. The foundational methods by Sor and Aguado establish a basic understanding or recognition of improvisation. Then the methods of Batioli, Boccomini, and Opus 100 of Mauro Giuliani, will be examined in detail.  Cadence examples, particularly from the Batioli method, will be presented as grist for construction of our own “improvised” preludes.

For more information, go to:  https://classicalguitarmagazine.com/alatamira-hong-kong-guitar-symposium-and-competition-is-fast-approaching/.